Confessions of an Economic Hitman

Posted on August 26, 2011 by Raghav/Raghu
Reading this autobiographical, tell-all book by John Perkins seemed surreal.
I am not someone who is very naive about manipulations; I would at least be able to discern between genuine attempts of foreign support, with those of attempts towards hegemonic domination, better than a lot many of us who are blinded and fooled by the corporate media. 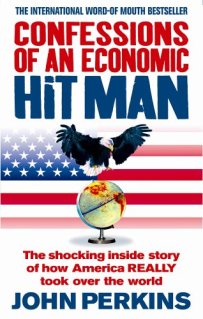 But, this detailed reporting from an insider sends shivers down my spine.

A “superpower”, pushing beyond the realms of being anything but ethical in order to dominate countries under its vindicative goverment, run by selfish, greed mongers in the background is hard to believe. The USA with its ancient Manifest Destiny and other crap, now has accomplished an indomitable position, where it has the say about anything and everything about every country.

While even countries like India (ironically the largest democracy in the world) is far from being soveriegn, as revealed in the recent WikiLeaks cables, where a cabinet reshuffle in Indian Ministers portfolio was instigated by the lobbyisits of US. When such is the case with the largest democracy, other countries in the middle east, African continent and Latin America, except for a ‘few nations’ are all entangled in this web unleashed by the aspirations of one country in its distopian dreams of a global empire with a “free” world market, based on exploitation of the majority for the benefits of a small minority, increasing the disparity ruthlessly at a global scale, including amongst its own people.

Instiutions such as the IMF, World Bank and even the UN have evolved to become primary tools used by this superpower and its allies to arm twist countries retaliating against the submissive nature of their hegemony.

This book gives a scintillating account of all the dirty tricks, evil ploys and inhumane nature of functioning of the system as it is today.

Defying the system when it is this hostile is the most natural response anyone who recognizes this hostility would end up doing. But, the efficacy of this system has been its subtle and orchestrated perpetration which keeps all of this hostility hidden from us.

That system is our enemy. But when you’re inside, you look around, what do you see? Businessmen, teachers, lawyers, carpenters. The very minds of the people we are trying to save. But until we do, these people are still a part of that system, and that makes them our enemy. You have to understand, most of these people are not ready to be unplugged. And many of them are so inured, so hopelessly dependent on the system, that they will fight to protect it.
Something on the lines of what Morpheus says to Neo in The Matrix, is the current state of the world.

Nonetheless, this ain’t no movie – People are dying, countries are getting impoverished and future is getting bleaker. We are all part of this megaplan of hegemony and exploitation,both by getting exploited and exploiting at various levels.

Defy and change!
We need to change it to a different world: A world as we dream of it, as John perkins puts it in the book.
Now what is the dream of the world we wish to live in is upto each individual to choose upon.

A fortunate mass of hydrogen cloud conscious enough to be contemplating that very fact.
View all posts by Raghav/Raghu →
This entry was posted in Uncategorized and tagged book review, corruption, society, world. Bookmark the permalink.

1 Response to Confessions of an Economic Hitman