Views on Naomi Klein’s “This Changes Everything” 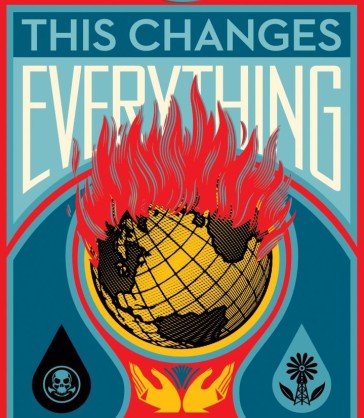 “…only mass movements can save us now”, is how Naomi Klein sighs a relief towards the end of her quintessential work on climate change and climate action, This Changes Everything.

I took up this book few months ago and have been reading it in intervals. Finally I read Part-3 of the book which captions itself as “Starting Anyway”. In second part of the book “Magical Thinking” Naomi Klein had a sharp critique of tech-fixes to climate change. In some places, she sounded a Luddite and that was a bit concerning to me. I have known her works since Shock Doctrine, a treatise on disaster capitalism and was looking forward to a radical critique of global capitalism and not focusing on shooting down propaganda technology by billionaire oligarchs.

In the end, This Changes Everything, is a scathing critique of global capitalism and the worst of it represented by fossil fuel industries. However, what is more affecting in this work is her pragmatic approach in bulk of the work on dealing with climate change.

She spends bulk of the third part on delving into the struggles of Indigenous people; predominantly the ones from her own country — Canada — in their quest to ratify historical treaties that promised rights to the native people. There is another line of thought of learning methods from ancient cultures, in a manner that should humble us (again) in front of nature than the current feeling of being the master species. These are interesting notions but, in my opinion, not tangible or scalable to tackle the crises at hand at a global scale.

There are, however, other radical ideas that she conveys which would disturb the world order and it is actions at these scales that have a shot at healing the earth.

Reparations are a touchy subject; to the colonizers and slave owners, of course. The argument that the wealth accumulated in the past has nothing to do with present generations and the idea of reparations is thus futile is a shallow excuse. The current wealth of the global north was built on their exploits of global south. Add industrial revolution to the equation and the results in the disproportionate emissions in the past two centuries by the wealthy and developed countries. In the past couple of decades when developing countries (like India and China) have attempted to follow suit, the earth’s atmosphere has started choking simply due to the scale at which these two large countries are replicating the new industrial revolution.

Then, do these countries not strive towards uplifting their populations?

It is in this scenario, that the crucial idea of “climate debt” that has previously been rallied by Bolivia and Ecuador makes perfect sense. The gist of it is that global north that has benefited previously from burning all the fossil fuels in the past two centuries holds a responsibility of compensating other developing countries. This compensation can be seen as investment in cleaner paths to development by not forcing the developing countries to take up the same path as the developed countries did in the last two centuries. Poverty must be alleviated but not by the same extreme consumerist and market driven manner in which it was accomplished in the last century.

This is a radical idea. And needless to say not an easy one to sell. But it is such drastic but holistic view at a global scale is what will give any hope for sustainable development of the developing countries, while keeping climate change below dangerous levels.

The idea of climate debt can also be internal, within countries, as the rich owe it to the poor who have not contributed as much to a global catastrophe. Sadly, however, it is the most vulnerable, who had little in making this crisis, are at the first to be affected as recent extreme climate events like floods, famines, storms and droughts have shown.

The analogy of Mother Earth

It is a dense 500 odd page book which is journalistic in style and engagingly factual. Towards the end, however, in the last couple of chapters Naomi Klein makes it deeply personal and delivers an effective epilogue to the book. She takes her personal struggles with fertility problems and ties it in a moving manner to the destruction of “Mother Earth”.

This is essential reading for everyone, and as she points out if there’s a lesson for us, we should stop seeing ourselves as mere takers but as caretakers.

A fortunate mass of hydrogen cloud conscious enough to be contemplating that very fact.
View all posts by Raghav/Raghu →
This entry was posted in Books, Politics. Bookmark the permalink.