Jose Saramago’s Blindness, for years now, has been my favourite work of fiction. In the past few years I have started to like Haruki Murakami’s works; reading them unscrupulously. Of late, however, reading fictional works seem to be getting harder. Not that they seem tedious per se; they are far easier to chug. But there’s a voice constantly questioning the point of reading (some works of) fiction.

After pondering a bit as to how I can parse some fictional works but not the others, I ended up with a couple of ingredients that make it easier to read and enjoy works of fiction.

Empathy: Success of a great work of fiction rests in its ability to enable readers to empathize with the joys and turmoils of its protagonists. This is a tough enough task already. Further, it is harder for me to connect with many works because the conflicts are distant and inaccessible. This is worse in science fiction and fantasy, as some of the conflicts, say induced by aliens or diabolical creatures, can’t easily quench my interest. These factors considered, reading some works of fiction ends up feeling like a chore and a poor return on investment (of my time). A work like Blindness or 1984 are great works of fiction because they scrutinize society within conflicts that are fictional but the rest of the narrative is engaging and not hard to empathize. Another subset of fictional works that I find engaging are mostly journalistic but use a fictional trope, like with Arundhati Roy’s two novels which can be categorised as social-realism. The protagonists here also have my attention and empathy, as the characters are mosaics of very real people.

Great writing: The second trait of works of fiction that I end up enjoying invariably have great writing – in the style and language. I use Murakami as an example for his unfettered and fluent writing that is a sheer joy to read. No plots or conflicts are necessary in these works. There are very few authors who are pantsters and can engage readers with their writing alone. Gabriel Garcia Marquez falls into this category in my reading.

Jose Saramago is the greatest in my view simply because he’s just the perfect blend of both traits I seek when reading fiction. 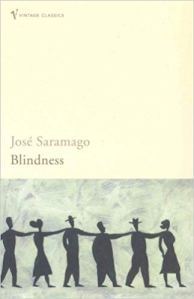 A fortunate mass of hydrogen cloud conscious enough to be contemplating that very fact.
View all posts by Raghav/Raghu →
This entry was posted in Uncategorized. Bookmark the permalink.