Listening to AR Rahman’s music on the day it is released has been a ritual that I follow almost for all his albums. Before the era of the CDs, I remember commuting to the music stores umpteen number of times on the music release days to get hold of the cassettes, and then excitedly open the inlay card to see the stills and lyrics, attempting to read the Tamil lyrics, while my Tape recorder would reveal to me the magic of AR’s music. 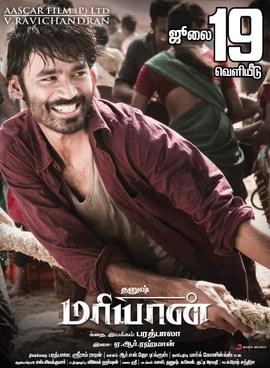 The digital revolution has of course deprived me of all these small joys and I get streams of binary!

What hasn’t changed of course is the impact the music has on me. After Kadal, I knew ARR was back in his best form after some digression into hasty and incomplete compositions (Jab Tak Hai Jaan, People like Us etc)

And now every bit of music I have heard from Maryan, since the teasers to the trailers had upped the expectations, and the euphoria I experienced while listening to it has been gratifying, as always.

As I have mentioned in one of my previous posts too, I am not reviewing the music at all – I am not capable of doing it. Just trying to capture my first emotions to the songs are being articulated here.

The teaser itself had gotten me crazy and I bored many around me by trying to sing all that was played in the teaser, and after the single released have had it like my mantra. Listening to the awesome lyrics and the divinely voice of AR just made it soothing. It has the power to lift you up! Nenje Ezhu

And my favorite track from the album! Lyrics are the best part of it, and also the arrangement. A feeling similar to that of Nenjukule from Kadal is what one feels again, and only better. Its been on loop for an hour now as I write the post. The first 5 seconds reminded me of “Aye hairathe aashiqui” from Guru though, which is erased once the strings begin.

A small bit from the trailer had a magical two seconds “hey mariyaan” sung by a female vocalist. And this is the song which has Chinmayi’s magical voice, appeased by Vijay Prakash who is only getting better with every song. A somber song, but the musical treat is simply irresistible. The violin in the background, the piano and the chorus all impeccably done. Might not go one to become a crowd favorite but to ardent aficionados like myself it is a treat!

AR hasd not done any funky tracks, which might get picked by kids for long now. Here’s the piece. Funky at many levels, the beats, lyrics and a peppy trumpet/nadaswaram piece 😛 This is the one that is going to be danced all the way in schools and at homes! Javed Ali in this song is like the mint leaf in lime tea! Refreshing.

This song happens to be my mom’s favorite song. The first few lines are hilariously about the phone calls she has to make to get me home! “It is late, dinner is going cold, when are you coming?”, wonderfully sung by Sakthisri of Nenjukule fame.

Excerpt from the BGM. Yes, it is peppy, but I would have wanted it not present in the Sound Track. Seems a misfit, although well done 🙂

What do you get when ARR composes a tune, Dhanush pens the lyrics for that and you get Yuvan to sing? Kadal Raasa. Addictive and groovy, will make it to the top of charts. Yuvan sounds unlike in his own compositions, but only better.

All said and done, the sound track sounds unusually AR Rahman, yet no one but he can render it this way.

A fortunate mass of hydrogen cloud conscious enough to be contemplating that very fact.
View all posts by Raghav/Raghu →
This entry was posted in Rants and tagged Uncategorized. Bookmark the permalink.