Posted on October 2, 2011 by Raghav/Raghu
Asymmetric Polarization has been a certain trait of society, as far as all the documented history of human race have revealed. This conscious polarization of the society into one small advantageous section, and a large suppressed section has been true since the times of patriarchal settlements to the current civilized democracies.

Creating a gradient in the society using various manipulable parameters, with an ultimate motive of facilitating oppression has been the unwritten rule throughout. The parameters, which have been manipulated at various epochs of History have been different: Class, Caste, Gender, Land, industries, and today we are at a point where Information is this gradient causing agent.

Controlled knowledge as misinformation, and suppressed information in the form of secrets have become the weapons of ‘mass’ destruction in today’s Information society. While there is information mining on certain type of information using all means possible; there is also an astronomical way of suppressing another kind of information.

Stuck in the middle of this Information Revolution, most of us are the ignorant technologists paradoxically driving the motors of this oppression regime. Like I usually end up saying,
The problem often is not arriving at the solution, but in many cases realizing the existence of the problem itself!

Even in this case, the lack of cognizance amongst us about the perils of the information gradient, that we are very much a part of, is of more concern than even the contemplation on the solution to this threat.

As instances of whistleblowing, RTI’s and WikiLeaks in general have shown the ever increasing risks involved with the just attempts of declassifying high level classified information should put us at alert, and we must begin to analyze the inertness of ourselves and the hyperactivity of the suppressors who would in turn manipulate and try disabling us!

We help build the gradient which is favourable to them, while ironically is perilous to ourselves. 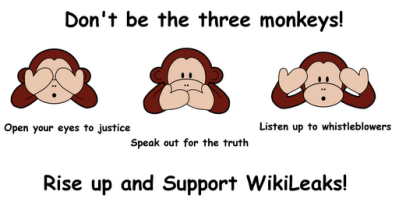 A fortunate mass of hydrogen cloud conscious enough to be contemplating that very fact.
View all posts by Raghav/Raghu →
This entry was posted in Uncategorized and tagged information, society, wikileaks. Bookmark the permalink.