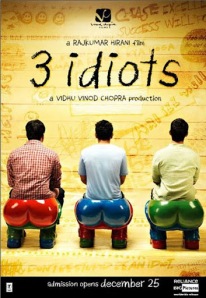 The current slogan of Hindi Cinema-All iz Well has caught on like Einstein’s Mass-energy equivalence. Everyone’s been praising the movie 3 Idiots exhaustively. And,it deserves it. The movie has done more than just entertaining the crowd.

A much needed national attention has been drawn towards the pathetic Training(not education) system our country boasts of.

Being in Karnataka, it is much more awkward. With around 200 Engineering colleges each offering at least five different streams of engineering,operating like a false mechanism uncourteously manufacturing IT stereotypes. It has given rise to a ridiculous scenario, where,people of varied interests are blindly entering the IT domain for the lucrative pays and lifestyles promised by the prospects of jobs in IT. Eventually,these herds of people are either converted into one of their products or, ultimately into broken unhappy individuals repenting upon their decision.

And talking about the dangerous grading system in education-It has been very rightly called a discrimination like casteism in the movie. Although this unfortunate system to a good extent has favored me, I understand and realize its inherent flaws which increase the rat-race tendency, bring down the confidence of students, reduce the spirit of learning and make education a painful formality.

With a system still reluctant to look beyond books, where people take up exams only to test their memorization skills, and where no ingenuity is encouraged, the very small percentage of the population having the luxury to afford schools and colleges is also being deprived of EDUCATION.

Things seem to be changing,but at a snail pace. The system should evolve,and swiftly,to encourage growth of vibrant young minds,instead of charring them down to an ash-tray!

Strive for excellence,and not for success. If you excel, success shall follow you- Baba Rancho 🙂


Hope All gets Well……