The post title contains names of two of the best movies which have culminated from Indian Cinema. These movies were released in 2000 and 2001 respectively.Because these were released when I was about 13,I had missed them then. I watched these two now,and have been left astounded by the man behind these pinncales of Indian Cinema. Both the movies have Story,Screenplay and Dialogues written by the genius Kamal Hassan.And Hey Ram was also directed by Kamal. 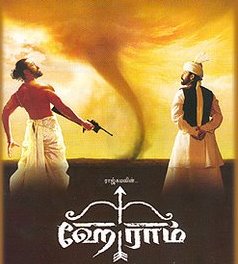 Hey Ram is a movie which cannot be measured by any standards-NO standard would be sufficient.A story of the unfortunate pain and bitterness between the Hindu and Muslim communities of the then Unpartitioned India,till date.A cinematic masterpiece of sorts. A plot which is so well interleaved with History,that it takes you through the mind of a sensible Indian citizen then- Saketh Ram,witnessing the chaos and blasphemy. The character tries to pin down the cause,and is convinced that it’s M K Gandhi. The dialogues pertaining to Gandhi are the most brave ones written(keeping the hyper sensitive Indian population and media in mind!).I was applauding within for the dialogue where he relates the People of India to Gandhi’s Three Monkeys,and while talking about people,goats,goat milk and Bakrid!

This is a movie,which is less famous in India because it is again something which is above the caliber of an average Indian mind. The final justification given for the protagonist’s Principle Reversal is mainly to console the audience,according to me. A must watch for any person related to India.Kamal Hassan excels in every field of the movie he’s involved in. 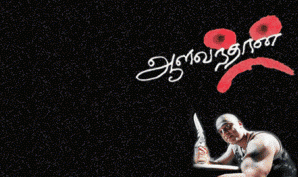 Now,talking about Aalavandhaan. A movie lot ahead of its times.Schizophrenia,as the basis of the movie,with again techniques and dialogues better than any movies. The movie has portions of cartoonish scenes in it.And,for those of you who didn’t know,that’s Anime style of movie making.Kill Bill Vol 1 too(2003)has similar inclusions. The scenes of drug induced hallucinations the protagonist undergoes are exemplary. The poems written by Vairamuthu,and beautifully recited by Kamal create a scintillating impact. Although,it has its few flaws,but the movie is a masterpiece yet again.

And,with a genius behind both these,and a lot more of quality Indian Cinema like Devar Magan,Anbe Sivam,Virumaandi-I declare myself an ardent Kamal Hassan fan from now on.