Don’t miss Baba, he’ll be back!

Posted on April 26, 2011 by Raghav/Raghu
After being unable to resist the temptation of writing about the great incarnate of the God : Sathya Sai Baba, I stand here guilty spilling out my deep, heart felt thoughts and softened emotions to you.

Who said the Baba is no more!
This incarnation of God, who had proclaimed he had created the world has taken a sabattical from his created world, temporarily.
Maybe, he’s out there paying visit to his peers in the other parallel universe. When the mortals of the Earth say, ‘He is no more’,it implies, he is no more available to us. Like a network outage, but in the cosmos. Signal will be back soon and with better reception.
In the end, as all his devotees would ardently believe, he’s out there somewhere, serving the poor and the rich of another world ‘impartially’ as he did on this, now God-forsaken planet of ours.

Baba was beyond the realms of materialism…
When followers offered him grand donations, Baba was only unloading them off the materialistic burden and bearing it himself on behalf of all his devotees. In his earthly absence now, this burden is going to create havoc in his own institutions, and this shows how great a cushion he was. He for all these years, silently was bearing all that humungous burden, which amounts to about 1.4 lakh crores of rupees in assets and some extra few tons of gold.
Can any mortal of this world even think of bearing such a burden? No.
And hence proved: He’s the God incarnate.

Baba was no materialist!
He was never a materialist: His simple saffron attire, gleaming smile and the radiant dark eternal hair, were all manifestation of his abundant spirituality. 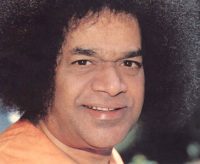 Further, his idea of materialistic detachment was contemporary, and not ancient. Not ancient for, some of the previous great seers (like the one I’m named after) seen by India,had attained their Samadhi voluntarily to relieve their bodies of the worldly burdens. Baba wanted to show how close to the humans he was, and how advanced his methods of operation were. So, he like just another man laid unwell in his own world’s, his very own hospital under ventilators. This distinction makes our Baba stand out, but closer to us, the mortals.

Baba’s prophecies weren’t wrong!
There have been numerous reports ever since the Baba started flourishing as the self proclaimed God he became, about his wrong predictions. It is the dim-witted mortals such as these rumor-mongers who fail to notice and croak that his predictions aren’t coming true.
It is like the elusive Space-time relationship. When Einstein theorized that time was not absolute, but relative, the world was turned upside down. In the same manner, when Baba predicted his own death at the age of 96, it was not in the Arabic numeric system and our mortal counting practice. It was in the divine numeric system of the great cosmos, which we mortals wouldn’t be able to fathom.
When he predicted great catastrophes, he didn’t mean only to us humans. There are great catastrophes unleashing,every minute, with thousands of lives being lost in the form of anthills getting washed away in the rain, and insects being eaten away as preys. And, that my friends is the catastrophe, which we the selfish creatures wouldn’t be able to comprehend.
Every prediction by him has come true, and his reincarnation will happen like he had prophesied.
Have faith my friends, have faith. Faith is the key, and lock to everything.

Baba will strike back!
Posthumous criticism from all the so called rationalists has been flooding and mind you rationals, your nemesis in the form of Baba’s reincarnate is under way. Remember what happened to your dear old friends – Kansraj (courtesy Krishna), Hiranyakashapu (courtesy Narasimha), Bali (courtesy Vamana), Raavana (courtesy Rama) and many others.
Mind it! Baba will strike back!

I am no Sachin Tendulkar to grab media attention when I cry, but i think tears are rolling down my cheek. I do not know if it is at the thought of demise of this version of Baba, or the expectation of his upgraded version, or imagining the state of his abandoned children. Nevertheless, the secretion from my lacrymal glands would remain the same.

Let there be light!

PS: This eulogy of mine has been written earnestly. If the reader is satiric about it, and finds anything sarcastic, as the composer of this post I take full responsibility.

A fortunate mass of hydrogen cloud conscious enough to be contemplating that very fact.
View all posts by Raghav/Raghu →
This entry was posted in Uncategorized and tagged god, sathya sai baba, satirical. Bookmark the permalink.

5 Responses to Don’t miss Baba, he’ll be back!