Off late, if you have been reading my posts, there has been a lot of open criticism and cynicism about the News and Media houses, for all the hampering they are rendering to the opinions of people and running of the country. Let this not imply that I am getting all to obsessive about this attack. These are only small vents of my disappointment from the anomalous consequences of Free Press and Free Media.

In such a grim situation, an attempt like Peepli [Live] is important within the realms of the real Indian scenario. Kudos to the team for such an effort. It can be genre’ised as a ‘dark satirical comedy’, but it does more than that by throwing some much needed light upon the mechanism behind the news manufacturing process, and the apathy of the politicians towards the real people. 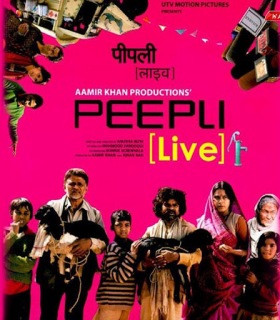 By real people I mean people, who are not influential enough, but are only daily-bread seekers: That alone is their ambition in life -Mere Survival.
We can rule out most of the urban population from this discussion, and entirely confine on the rest of the huge population from the rural corners of India. The worth of these people to politicians is ‘One Vote’ during elections, and a hot-selling story for the media. These people are like Use & Throw commodities.
People who have no idea of their rights and who are naive about the exploitation they are being done to.

From mining scams to land acquisitions, the corruption feeds on not only the resources of these people, but on their lives. Literally, driving them to suicides as a political gimmick.

People like P Sainath, who brought to light these haunting issues are needed in more numbers. We need to do our part in clearing this sewer-like filthy system..

A fortunate mass of hydrogen cloud conscious enough to be contemplating that very fact.
View all posts by Raghav/Raghu →
This entry was posted in Uncategorized and tagged farmer suicides, paid news, peepli. Bookmark the permalink.