“Right to Education” is late, nevertheless, it has arrived!

A good initiative by the Govt. This is by far the most significant and genuine hint of long term social welfare the Govt has shown. The italicization of the two words conveys the status of this move. But, will this hint at an initiative be adequate to cater to the nation’s requirements?

Personally, I have had a strong conviction in this regard: “Only quality education of the masses can empower them, making them the fuel for India’s future run. Without uniform reach of quality education to every citizen, living in each and every corner of India, the current trend of suicidal polarization of India will take its toll on us, yielding a lopsided country filled with disparity and frustration.” 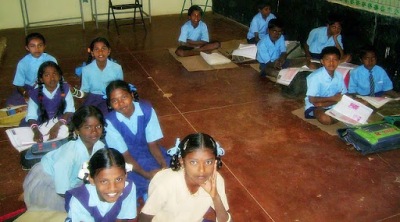 (Students in a Govt.School in Bengaluru)

Implementing the “Right to Education” is going to be an arduous task which will take decades for fulfillment. Considering that this will somehow be implemented in due course of time, although no guarantees, we already have to start analyzing the quality of such a system when in place.

Now, we might want to turn a blind eye towards the current Govt. schools in India, but, in the first place if this system of Govt. schools had been efficient, yielding better education to pupils, at least basic education would not have become a hot commodity in the society, which is accessible only to the what I call ‘circumstantially favored’.


I am apprehensive about the feasibility of implementation of the 25% quota to the ‘weaker sections’ in private schools. ‘Weaker sections’ are determined by a few documents, and the weaker sections who really are in need would not either have the awareness or be in a position to acquire these documents. This is the problem at the ground level, which cannot be tackled only by passing amendments and bills!

As a result, this would be misused, and a living manifestation of perils of this sort is the ‘reservations for the backward classes’ in India.

“Right to Education” sounds good and will be good if it reaches the needy. Now, this right must be bulwarked by other measures necessary to ensure the successful implementation . Each of us do have a role to play in this- just by being responsible and ensuring that our fellow citizens get what they really deserve.

PS: More pictures from a Government school in Bengaluru, adjoined to the Institution where I pursued my Bachelor’s degree. An initiative from a fellow classmate, drove a few of us used to visit this school, trying to enhance the English and Computer skills of these enthusiastic kids. We did the little from our side. Such proactive initiatives have to be widespread for the Govt. schools to get better.
As a permanent solution the system itself has to be renewed, so that it can match up to the quality of private education in India. The current system is nothing but a formality! 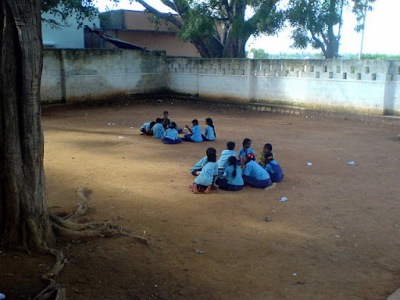 1 Response to Right to (quality) Education…