On the first day of the National Conference on Free Software,i.e., on the 20th of March,by the end of the evening I was assigned with a task. I was asked to drop the Press Note of the day’s proceedings to all media centres. I was told that an autorickshaw would be arranged for the purpose and that the driver knew most of the newspaper centres and TV broadcasters.

So,I hopped into the rickshaw, and the driver-T.N. Manjunath briefed me about the places we would be going and warned me that it would take a long time.

Once we started visiting the media centres, I was taken aback, firstly, by his cognizance in this regard- he told me that if we had started early we could have reached out to about 70 centres(that’s full attendance!). Nevertheless, in a span of two and a half hours, we visited not less than 40 newspaper and TV centres in the peak hours of Bengaluru traffic.

Out of curiosity I asked him as to how he was acquainted with the MEDIA map of the city. This initiated him to mention about his endeavors apart from being a rickshaw driver.

He is a proactive volunteer and activist of various social concern groups. He is also an active member in a political party and other forums. He and his buddies bring out a weekly newspaper-Janashakti in Kannada and he also lends support to another Malayalam daily. He narrated to me the legend of a Union leader of theirs-his hardships,sacrifices and accomplishments. He spoke about the Women’s day celebrations one of the groups he endorsed had organized and the success of it.

There were a many other inspiring activities he was engaged in, which I might have missed out. But, one thing for sure,if each of us try to emulate a bit of T N Manjunath, trying to do a little towards the betterment of the society ‘proactively’ in our own ways, a lot of the reasons we crib about in the world would evanesce into oblivion.

I am deeply inspired to have met a ‘common man’ showing uncommon concerns towards the society,bundled with tremendous energy and strong conviction. 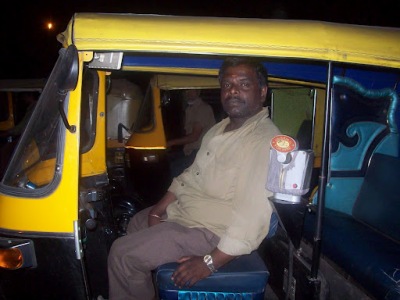