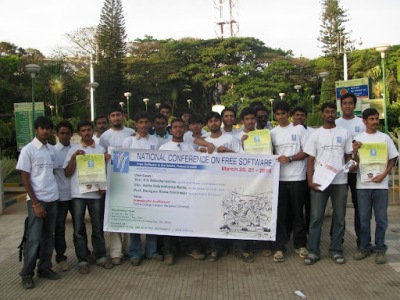 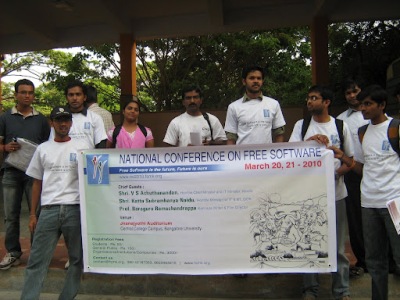 FSMK(Free Software Movement- Karnataka) is organizing the National Conference on Free Software, where issues pertaining to Freedom in Computing and the related Software are going to be discussed and debated in a week’s time, on the 20th and 21st March. Campaigning for the Conference took a different shape today when Freedom Walks were organized starting from two nodal points in the city; One starting from Mahatma Gandhi statue on M.G. Road and the other from Jayanagar 4th Block.

Students from NHCE,CMRIT,YDIT took up the initiative to call for these Freedom Walks at M.G. Road and Jayanagar 4th Block, along with numerous other activists from FSMK. We initially held a gathering to gain attention of public, displaying posters, distributing Conference pamphlets,issuing copies of Bharat Operating System Software(BOSS) provided by CDAC, and other GNU/Linux operating system software, then began marching along the streets in small groups talking to people about the Free Software Movement and the Conference.

During campaigning, the one thing which took most of us by surprise was the interest ‘general public’ showed more than the young minds and the techies we were targeting.There was lot of inquisition about the Conference and the other activities we were engaged in from the general public. This inquisition of the ‘common man’ towards a cause like the Free Software Movement is to be converted into cognizance about issues pertaining to ‘Society and Digital Freedom’.The National Conference is one such effort from FSMK. 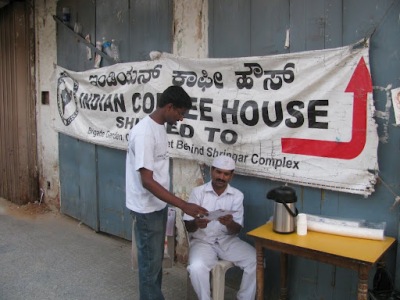 The lacuna in the society we are addressing surfaced again while interacting with people, when one person inquired about the conference and expressed his interest in participating in it, but also told us he was an illiterate and that he knows only Kannada. We then welcomed him to the conference, briefing him about the gamut of Kannada related activities we are organizing as a run-up to the conference and in the conference itself. He was glad to accept the invite.

While campaigning continued profusely,an auto driver approached us. He was curious as to what we were doing. After listening to us he introduced himself. He has completed his Electronics Hardware training and conveyed to us his interest in learning some software technologies. He was interested in the National Conference as well, and told that he would be contacting the FSMK office at Madiwala for further details. 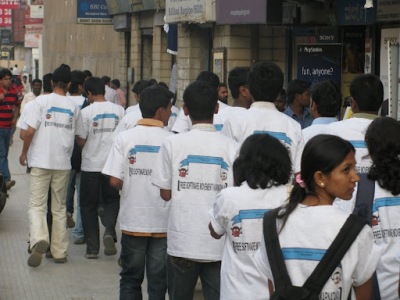 Bangalore being the IT hub, didn’t disappoint us. We also encountered Software Gurus working in Free and Open Software Technologies, who were delighted and appreciated our efforts for organizing a National Conference on Free Software.

This was an eye-opener to lot many student activists of ours, who would now start to believe that there definitely needs to be a bridge between technology and the common man. 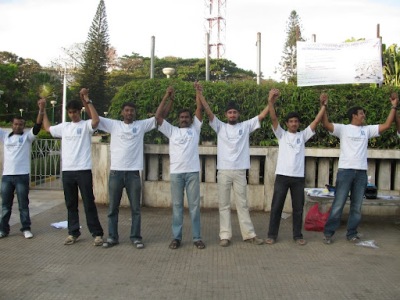 The motive behind organizing the Conference is to try and bring awareness to people about the choice to Free Software and technology (Free as in Freedom) and also to throw some much required light up on the gap between ‘technology and common man’ in an Indian scenario.