The Legend of Hindu Mythology

With Gowri-Ganesha festival in an hour, recollecting the legacy of Indian mythology would be appropriate.

The greatness of these epics are the time periods when written and the grandeur of imagination incorporated into them.

To start with, the roles of the Trimurtis: Brahma-The Creator, Vishnu-The Sustainer and Shiva- The Destroyer, and the legends behind each of these deities are excellent pieces of literature, and unsurpassable for the variety and the logical intricacies in them.

I personally love the the stories of Vishnu, and his ten incarnations, which have intriguing stories interrelated in multiple frames of time.

Of all the incarnations of Vishnu, obviously apart from the versatile Krishna, I personally like Narasimha (a futuristic hybrid of man+lion, of the recent likes of liger!). The cause for his incarnation- Demon king Hiranyakashyapa, and his son Prahlaada, and the immortality boon and the shrewd cracking of the boon to kill him, awe me for the sheer diligence in the work that is so ancient. 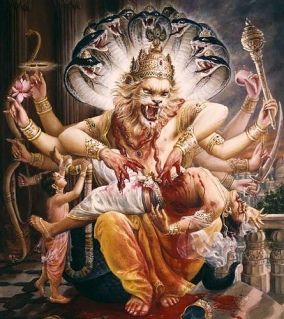 Talking about the two major epics from Hindu mythology- The Ramayana and The Mahabharata, the latter easily beats the former with its grand scale, plenty of rich and complex characters, in an elaborate but meticulous plot. In Mahabharata, the negatives of the dominating positive, and the positives of the wronging negatives are exemplified in an impeccable manner. For, it is usual to show the right as right,and the wrong as wrong  throughout. But, if observed in Mahabharata, all the facets of all the characters are excellently presented, without the prejudice of them being principally right or wrong. The various facets of characters manifested throughout the epic, with all their nuances and subtleties make it undoubtedly the best Epic written hitherto in any country in any period of time. 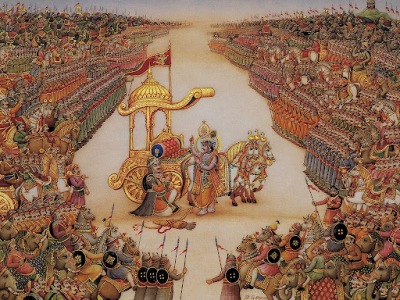 Although, I haven’t read these, but have heard, and been hearing the stories, or watched them on TV. They have had tremendous positive influence on me. Mahabharat, Jai Hanuman,Sri Krishna and numerous other mythology based chapters in Indian TV have come by. But, today I apprehend, even with hundreds of channels there is very little of accurate mythology being shown, and more of fabrication even in the little of these classics, to fit the imperfect society of today’s world.

With the growing global convergence, we seem to be losing firstly the cognizance of, and secondly the authenticity of such mastermind epics. Colleagues mentioned that in Chota Bheem, Bheem plays 20-20! Hope he’s not on Facebook too, else the kids might include FB to be part of the Hindu mythology…

Creativity in the real sense, is lacking today, and by properly infusing the Hindu Mythology to the newer generation we could expand their realms of imagination. And, not to forget the diverse stories from these classics which are eternal in the truest sense.

PS: Well, if you were thinking I was talking religion – Nope, it was about creativity…

A fortunate mass of hydrogen cloud conscious enough to be contemplating that very fact.
View all posts by Raghav/Raghu →
This entry was posted in Uncategorized and tagged hindu mythologgy, mahabharata. Bookmark the permalink.

2 Responses to The Legend of Hindu Mythology