Like you all know, I do not indulge in specific days for celebrating specific emotions ( love or friendship!). But, I have decided to commemorate my perception of friendship today, by dedicating this post to one of my closest (of the very few) buddies – vikku.

Sometimes, we meet people who are so not like what they would go on to be; Be it in their appearance, or in their influence on us. This pal of mine was one such weird creature( during our first encounter) – well built and long hair; He was soft spoken, which still didn’t help me  from getting intimidated.

Then there was the revelation of him being a descendant from the brains of IISc; The plot thickens, now you got to be intimidated by his intellectual abilities too. I get hold of his resume then, and I see geeky projects put up in it, which testify my awe. We are until then just hi-bye pals.

Then suddenly, out of the blues, he comes asking me to be part of some student satellite making project ( I’m like what?), and I hopped on, and there starts the journey of these dosts.

Ever since we started working on the Student-Satellite project as teammates in the same sub-system, we started growing as the friends we are today. This is one other good thing, being part of the project has given me.

Our ideologies have been I should say, ‘Vertically Opposite’, but still the rapport between us goes parallel; Admiration mutual, and the zero ego, makes being friends with you one of the nicest things in life.

I know you are just going abroad for studies, and with the voice and video chats we won’t feel distanced, but still venting out my perception about friendship, keeping you in the epicenter makes it special and appropriate da 🙂 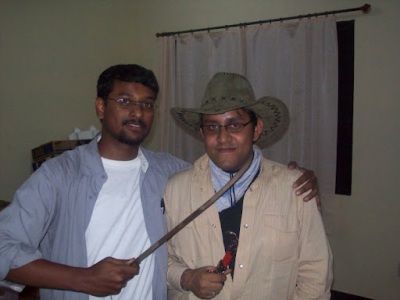 PS: The record of watching bad tamil movies ( Naan Kadavul, Kandasaamy and Aayirathil Oruvan) has to broken when you are back da;)

A fortunate mass of hydrogen cloud conscious enough to be contemplating that very fact.
View all posts by Raghav/Raghu →
This entry was posted in Uncategorized and tagged friends. Bookmark the permalink.