After the first day of enthusiastic activities like talks and hands on workshops, the momentum had been set for the second day of the MiniDebConf. The proof for it was the missing students in the Seminar Hall, who were all busy in the lab since morning trying out packaging and other technical skills.

Although, the intervention was made by us, moving the talks scheduled for the day to the lab.

The first talk for the day was highly important, which was about Free Software in Education: The scope and necessity for usage of Free Software (Technology in a broader scale) in the education system.

Mr. Vikram Vincent accentuated on the need for using more technology in the Indian Education system quoting anecdotes from mythology like the Ekalvya, Akshaya Patra and the ‘Five loaves of bread and two fishes’ from The Bible. This entire talk was very necessary to add a social paradigm to the contributer mindset of the participants; It was well recieved by the audience.

I, then touched upon the lack of a structured mechanism to fill, what i called The PPP (Propagation, Percolation and Perpetuation) deficit with respect to the spread and usage of Free Software in a polarized country like India. This was again discussed well, with active participation from the participants. 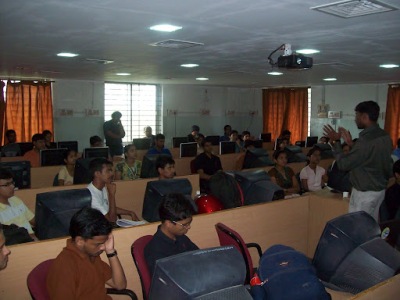 The rapport between Debian and derivatives like BOSS was debated, and it was conveyed to CDAC that contributing their changes upstream was essential to be part of the movement. This has been a long standing issue about the lack of upstream contribution by CDAC in terms of changes and packages.

After a lunch break, filled with charged up interactions with the participants who were keen on involving themselves with the movement at different levels took some well needed mentoring from the organizers and guests. The much needed non-technical, i.e., socio-political flavor of the Free Software Movement as a whole was imparted during this interaction.

Post lunch, there has been another hands on session targeting the packaging going on now, while the technical head gear has been worn by all of us.

Ultimately, like the previous major events of Free Software, lot of energy and synergy has been churned out during the conference, making it a great experience all of us.

A fortunate mass of hydrogen cloud conscious enough to be contemplating that very fact.
View all posts by Raghav/Raghu →
This entry was posted in Uncategorized and tagged conference, debian india, MiniDebConf. Bookmark the permalink.